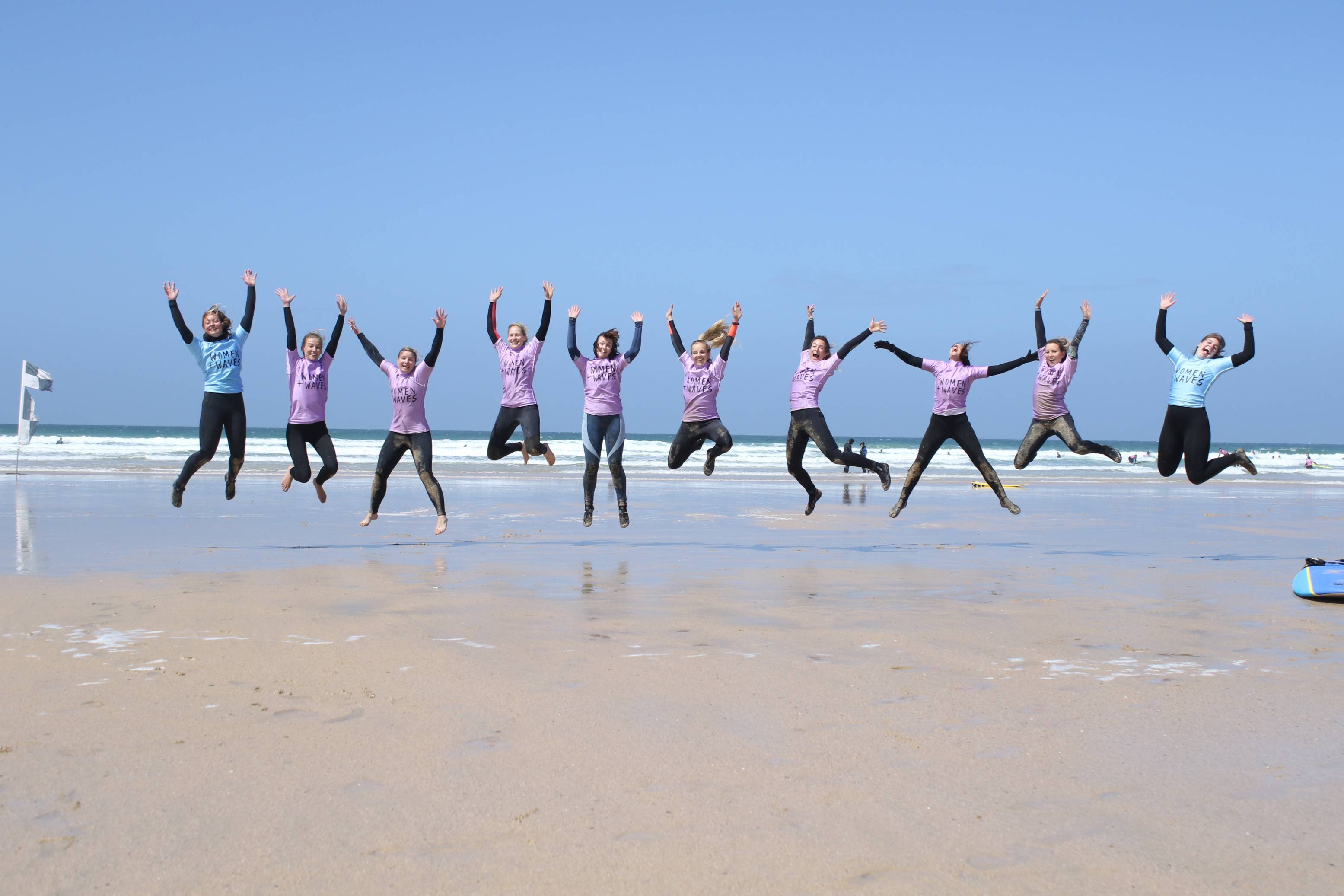 26 May Surfing with the Women + Waves Crew in Newquay

Posted at 18:46h in Uncategorized by Monica 0 Comments
0 Likes
Share

There’s nothing like jumping in the refreshing cold sea to wake you up after a long, dark winter – especially after the year we’ve just had. For me, it had been seven loooong months without the ocean, landlocked and locked down near London. So as soon as things started opening up, I hopped on the train down to Newquay to get a much-needed ocean fix.

Right at the end of my trip, I was invited to join a surf coaching weekend with Women + Waves. My train home had just been cancelled, and I was looking for every excuse to stay a little longer… And what better excuse than to spend the weekend surfing my brains out with the raddest group of water women!

So that’s how I found myself the next morning sitting amongst seven other women, all bright-eyed and beaming from ear to ear, excited for that first taste of salt water. Most of us hadn’t surfed in a long time, and after going around introducing ourselves it became clear that we all shared the same goal for this weekend: to get our confidence back up after our surfing hiatus.

That’s where lovely Lucy and bubbly Beth stepped in, our instructors for the weekend. Super supportive and full of energy, they were always ready to give out helpful tips. When I’m surfing, I sometimes find that I lose speed and get left behind at the top of the wave. Lucy had spotted this straight away, and she explained to me that I needed to work on transitioning out of my bottom turn by compressing my knees again after opening up to the face of the wave, so I could then drive my board back down the face and continue riding the wave.

The biggest game-changer? The mid-session hot chocolate break! After surfing in warmer waters the past couple of years, I hate to admit I’ve become something of a fair weather surfer… But a cup of hot choccie and a cheeky brownie was enough to refuel and warm up before jumping in for another power hour.

Next up was the video analysis, where we had the chance to look back over our photos and clips from the session. Watching yourself surf is such a great way to improve – and also the only way you’ll spot the bad habits you’ve picked up! Lucy was really great at identifying where we could all improve, often pointing out small adjustments that would make a big difference. 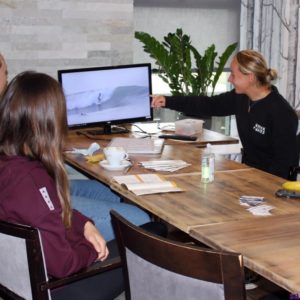 After our surf, we had lunch and went over the video of the session and received loads of super encouraging feedback, followed by some surf theory.

Armed with the advice from the video analysis, the next morning we headed down to Towan for one last surf. This beach is a lovely little bay tucked away between the harbour and the Island, a rocky outcrop connected to the mainland by a foot bridge. It’s the ideal spot when the rest of the beaches are big and blow out, so even though the swell had picked up we were still sheltered from the wind and found some nice clean waves. I took out one of their demo boards, a beautiful 7’1 single fin by a local shaper that was super fun to try. The Sunday session was followed by another video analysis, where we could see how much everyone had progressed from the day before.

Everything about this weekend was fun, inclusive, laid-back and surf-focused. Whether you were up for getting outback or didn’t fancy the paddle out, there was absolutely no judgement or pressure. Lucy and Beth were both compassionate to everyone’s individual needs while making sure we were spending as much time in the water as possible. With salty hair and a wind-burned face, my ocean cup filled up, I hobbled onto the train the next morning with that sweet exhaustion that only surfing can give you.

Thanks to Women + Waves for putting on such an epic weekend!

If you fancy dusting off the cobwebs for an unforgettable weekend, check out the Women + Waves calendar of events.