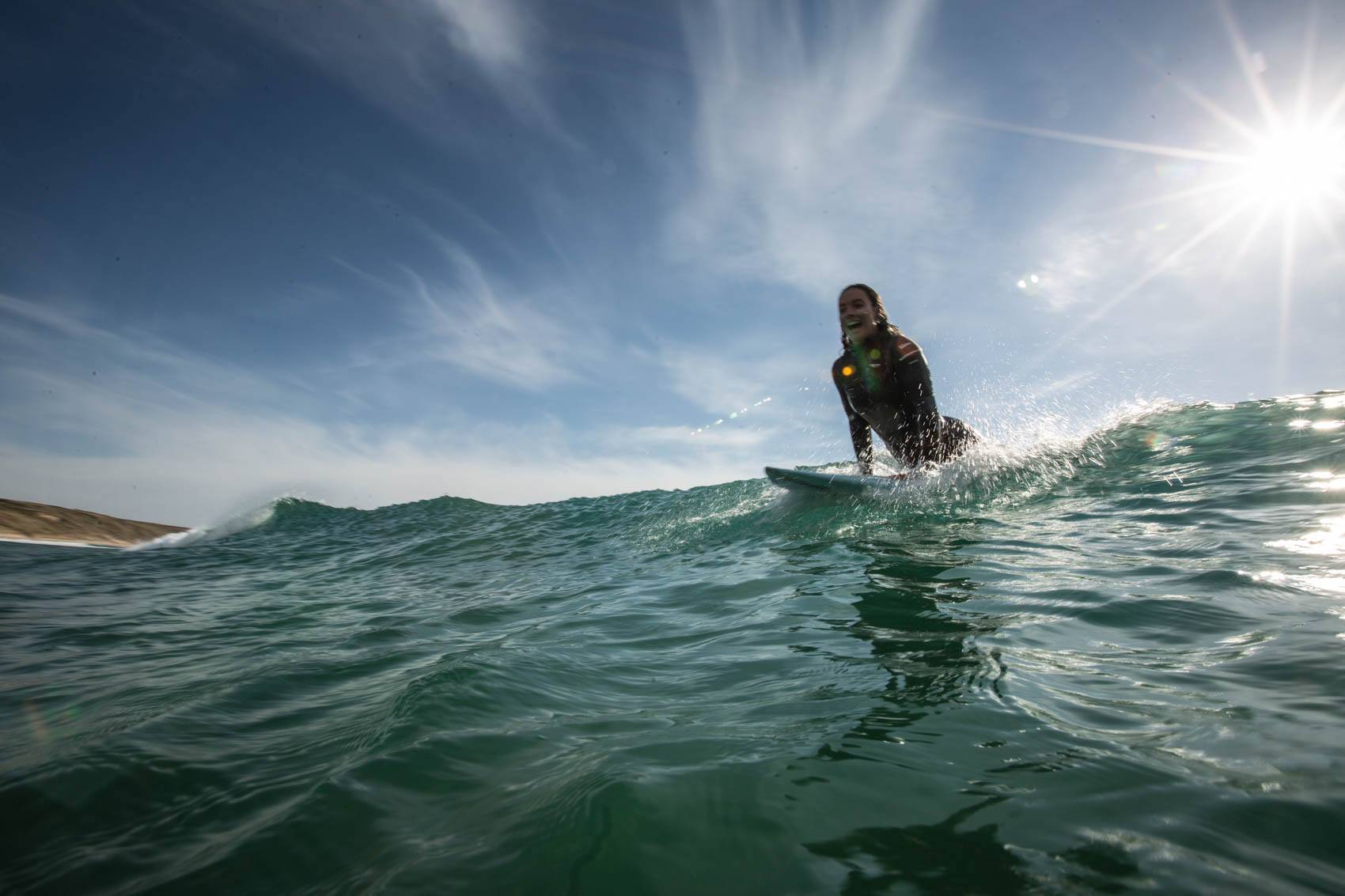 Fear; a natural feeling but occasionally a crippling nuisance. W&W Host Emma shares her five tried-and-tested strategies for fighting the feeling and reclaiming her zen when surfing outside of her comfort zone. 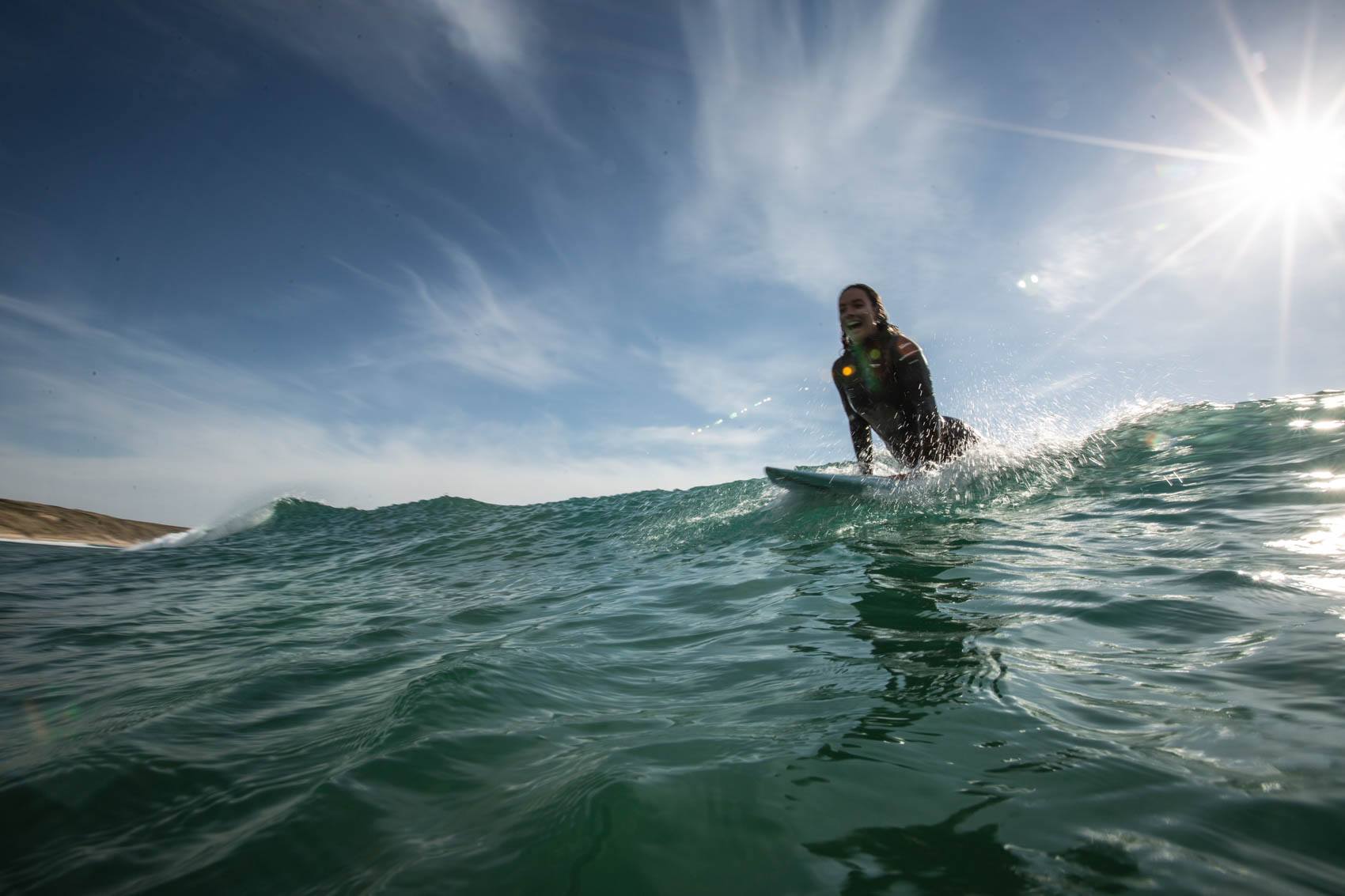 On every Women + Waves weekend this year we’ve seen women push themselves; to go for the extra wave, take that deeper takeoff, cruise along that steeper face…

It’s made us all at Women & Waves so happy to witness the strength, support and stoke everyone held in high regards for themselves and each other. The vibe in and out the water is always wild with friendships blossoming and surf skills booming! It’s fair to say at the evening meals everyone is completely knackered but downright stoked, with beaming smiles and sun-kissed faces.

On a few of our weekends, we’ve had big swells and solid surf hitting our Cornish shores, sometimes with more force and power than a few of our Women + Wavers are used to. It’s ideal because there is no better place to be when you feel a little out of your depth than surrounded by fully qualified instructors that have years of experience to guide you through your lessons.

Newquay boasts some of the best waves in Cornwall, and with our weekends coinciding with the off-season, there are fewer people in the water – what’s not to love! We often rotate between Towan Beach and Fistral, depending on swell. From the very first lesson, we are assessing everyone’s strengths and weaknesses, and of course, we understand the conditions in the water. We would never take anyone out who we felt couldn’t handle their own out there. We believe in you, you just needed to believe in yourselves.

Whenever you are out of your comfort zone however, it’s easy to feel out of your depth. Sometimes nerves turn to fear and fear turns to panic – it all overrides your initial good vibes. We’ve watched inspiring ladies paddle out into bigger waves than they were used to and fight the fear again and again. Every wave they caught was well deserved!

I couldn’t help but personally recognise those sentiments of fear I’ve felt so many times before. It’s easy to assess the situation from the outside, but when you’re in the middle of a large breaking set or holding your breath for what feels like a lifetime then it’s hard to process things slowly.

So I wanted to share the coping strategies I use for when I feel out of my depth, or panicky, or fearful, so that when we’re next all out there together we can remember these five steps.

It’s always daunting surfing a new spot, especially when you’ve already over-thought it a thousand times beforehand. “Negative breeds negative”, that’s what a close friend of mine told me when I was going through a debilitating negative thought cycle in my life a year ago. It hit me hard and I started spiralling out of control. Eventually, it began to affect my surfing. Even before I paddled out I would say to myself, “Uh, you’re shit. You’re never going to get any better, these waves are too big for you!” or “Uh it’s too windy, you’ll never catch anything”. I was a pleasure to be around, as you can tell!

But on hearing my friend utter those words, she snapped me out of it. Thinking a negative thought just bred more negative thoughts. But turn this on its head and think and you’ll find “positive breeds positive”. And the theory works and importantly, helps!

Now when I feel a little out of my depth, I try and concentrate on thinking positive thoughts and focus on what I want to get out of this surf. “So, it’s pretty chunky today. Well, fuck it. I’ll paddle out and practice my duck dives and if I make it out back, happy days!” Focussing on the positive instead of overthinking the conditions are way out of your league makes such a difference in how your surf with play out. 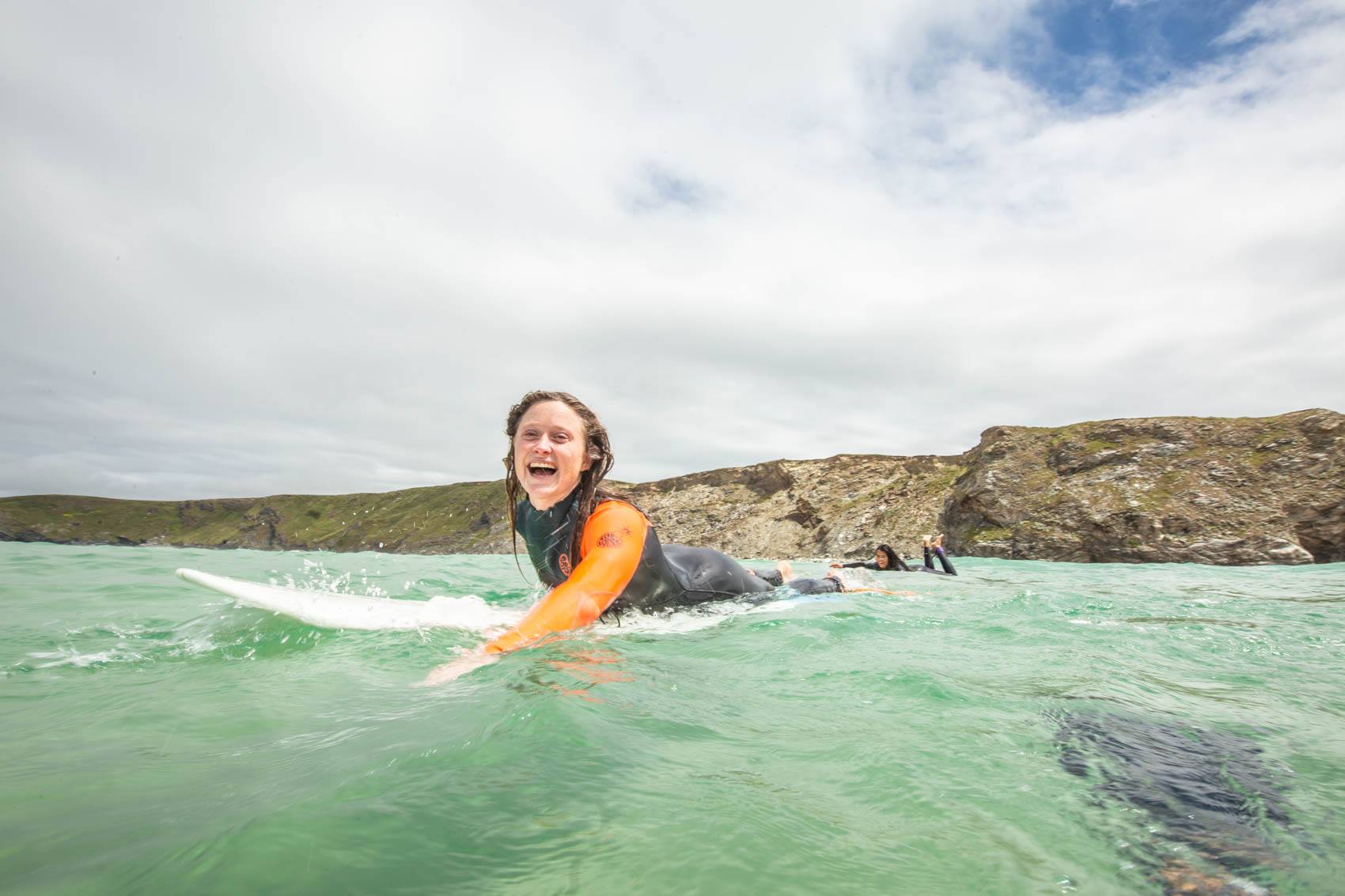 3. Just don’t give too much of a shit

I know you’re probably thinking ‘easier said than done’, but really, channelling the art of not giving a shit is a helpful skill. I met a girl last year who I instantly loved. She was cool, calm, friendly, relaxed, confident, a sick surfer… and had a dog. Perfect! As an anxious soul, I find it hard not to give a shit about most aspects of life. I overthink things until I make myself sick with nerves and give myself a bad case of anxiety over nothing at all. This woman, who I ended up living with over the winter, has slowly but surely taught me the importance of not giving too much of a shit. She’ll paddle out in overhead surf in the middle of winter (without boots on) to just give it a go and see what happens. She never expects anything from her surfs, she just wants to get in there and have fun, catch some waves.

I feel we put so much pressure on ourselves to perform and succeed every time that we overburden ourselves. You lose that addictive sense of fun. But paddle out there without expectation and you’ll be more likely to just enjoy it. If the conditions are a little out of your league, then at least you tried. 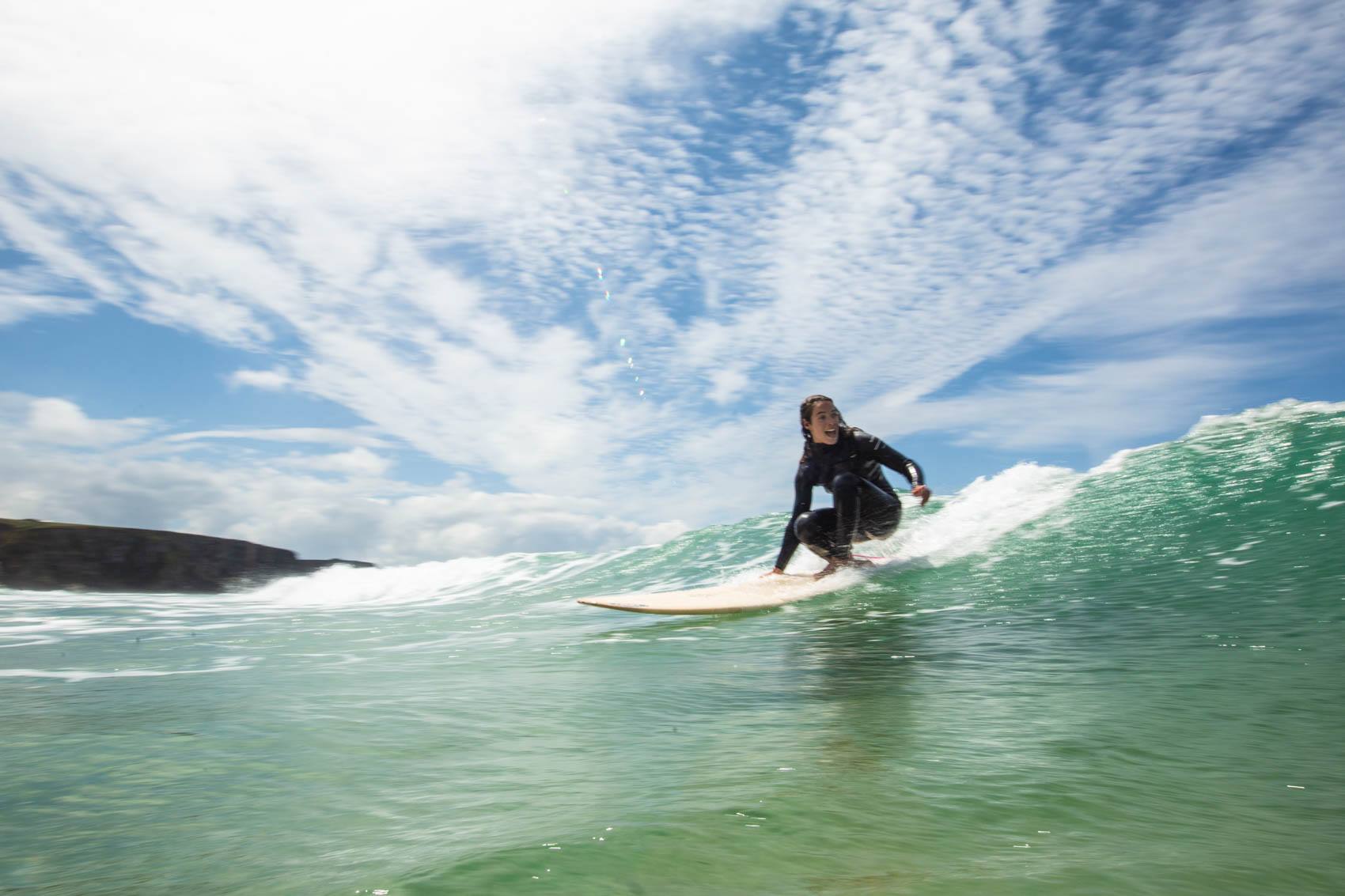 If, at some point, you find yourself out in the line-up having taken my advice, not giving a shit but are in larger surf than you’ve been in before, then breath. Inhale for four seconds and exhale for another four. Repeat this five times, or as much as possible until the next set starts to roll in.

If you’re in a torrent of white water when some panic hits, pop up to the surface, look around and catch a wave into shore. Take a break on the beach. Sit down, inhale, exhale, inhale, exhale and wait until you feel completely calm before paddling back out. Or, head in and congratulate yourself for trying. Even the best surfers have to centre themselves sometimes.

There was a moment this winter in which my body started shaking involuntarily after having found myself in surf that was way out of my comfort zone. I’d paddled out with my friend into 6ft+ sets, which were detonating just a few feet away. I hadn’t been thinking/overthinking it at all, the only thing that was on my mind was making it out back… “paddle to the right, duck dive that beast, ah ok, paddle to the right a bit more, shit that guy is going straight for my head, oh god that’s chunky, oh that’s going to break right on top of me, ah deep duck dive, holy shit ok made it out of that one, bah don’t look just paddle some more, deep duck dive oosh that wanted to rip my arms off, ah sweet made it out back, just paddle over there it looks safe-ish. Oh what, that thick lip is coming straight for me…”

After that beast of a paddle-out getting knocked around in winter swell, my heart was thumping like a rabbit’s after out-hurdling a fox. I could feel my body tensing, my Amygdala channelling that fear-ridden fight or flight response, eyes wide and breath shallow. At this moment I realised that if another big wave were to come along and plunder me into liquid darkness, I wouldn’t stand a chance. So I immediately started breathing. Deeply, slowly, desperately, in an attempt to sedate my overzealous heart. After a minute or so of breathing in for four seconds in and four seconds out, I felt my shoulders relax and the tense frown on my face loosen. Soon after, a chunky little number was coming my way.

I continued breathing deeply as I paddled to position, it picked me up and I slid down it’s looming, monstrous face, hurtling at full speed. It was insane. I veered off the back before it closed out and crumpled my body. The endorphins were pumping. I paddled back out with eyes wide and mind in disbelief, now craving another just like it. I remembered my breathing and began again, trying to calm my racing heart. I had recalibrated my fear levels.

I remember looking around for my friend with whom I’d paddled out, now nowhere to be seen. She was back at the shoreline. You win some, you lose some. On that day luck, deep duck dives and deep breaths were on my side – If in doubt, exhale it out!

My final rambling point is to visualise exactly what you want to achieve before it’s even happened. Our Women + Waves coaches will guide you through exactly what they think you should be working before you even set foot in the water. Picturing yourself completing the task in hand before you’ve even done it is a proven method to get you nailing the process.

Focus on one thing at a time, if that first thing is paddling with commitment, then focus on that. As soon as you focus all the other minor factors such as, “Ah it’s a bit onshore and messy” will become completely insignificant.

Visualise yourself paddling hard for that wave, popping up and cruising along the face with confidence. Once you’ve imagined yourself doing it, the physical action of it won’t seem so difficult and otherworldly. This visualisation process has been proven to help even top Olympic athletes by building new neural pathways, so we might as well jump on the bandwagon! 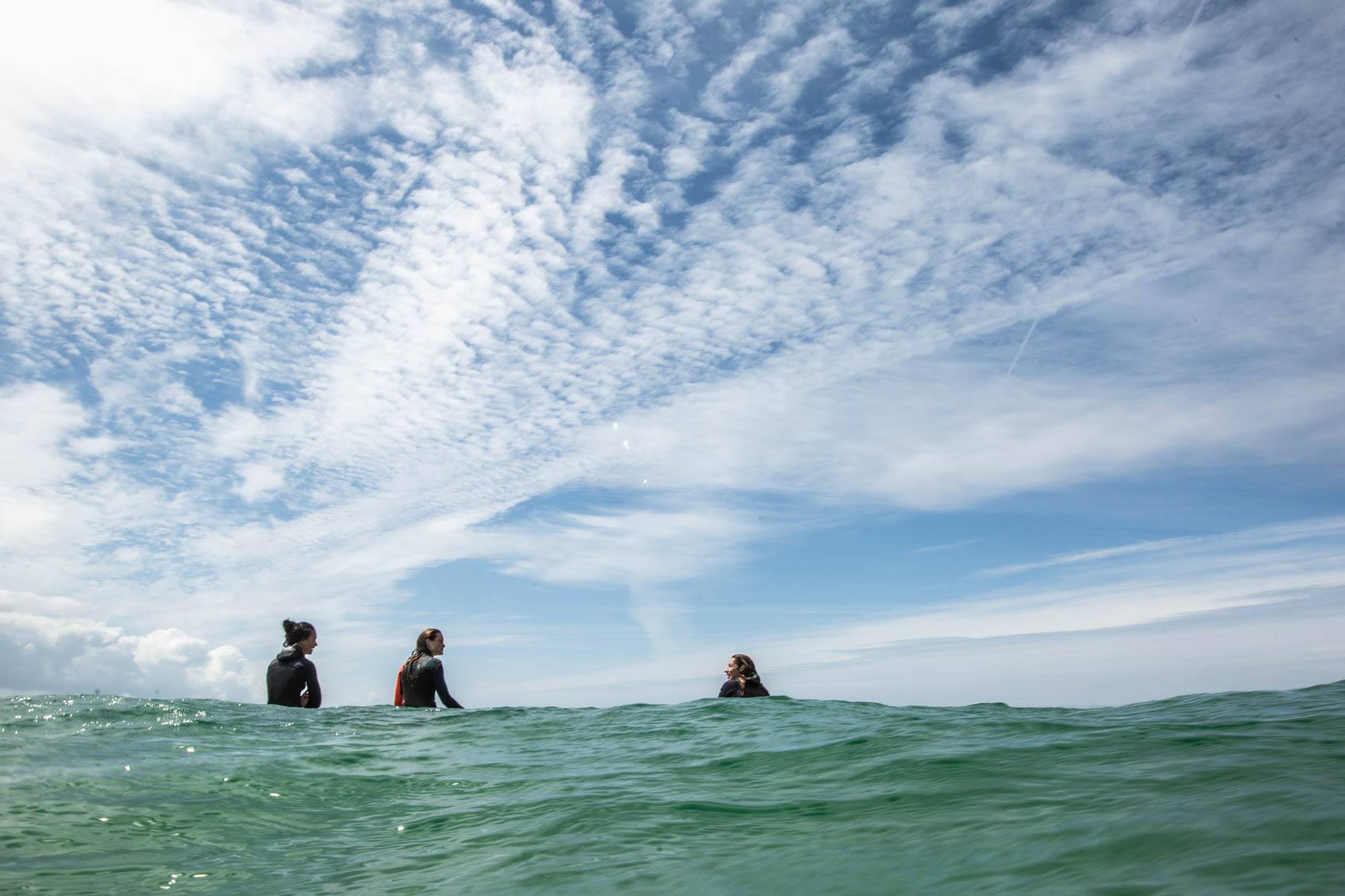 So I hope this article is of some help to you guys. I can’t wait for the upcoming September and October Women and Waves weekends. We have an incredible line-up of instructors and photographers onboard and those Autumnal months always bring with them good waves and good weather.

No fear, no problems. Just stoke, good waves and good vibes all weekend!

I’ll leave you with this quote by Jaimal Yogis, Saltwater Buddha from A Surfer’s Quest to Find Zen on the Sea.

“The body moves naturally, automatically, unconsciously, without any personal intervention or awareness. But if we begin to use our faculty of reasoning, our actions become slow and hesitant.”

Sorry, the comment form is closed at this time.