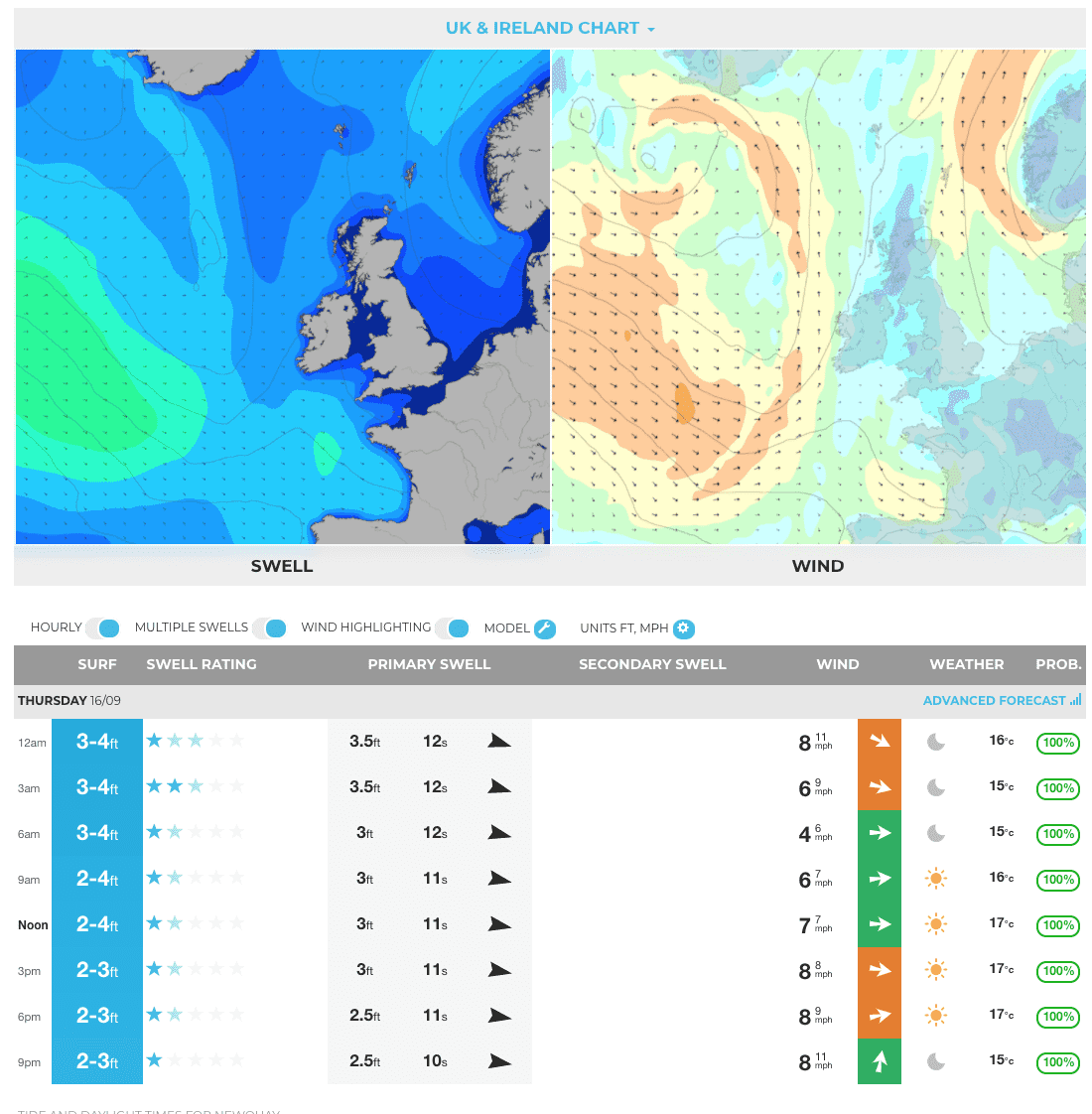 18 Sep How To Read A Surf Forecast

Understanding the future wave conditions by reading a surf forecast is one of the most important skills you should have as a surfer. Being on the right beach on the right day with the right conditions is the best way to maximise the number of good sessions you have – and those good sessions are what make you better at surfing!

But before you learn how to read a surf forecast, you need to understand how waves are generated in the first place.

How are waves formed?

At first, it’s a chaotic mess of choppy waves of all different sizes moving in all directions and at different speeds. But once they’ve got enough energy from the wind, the waves spread out into swells and begin their long journey towards our shorelines, building in size all the while. Eventually, they form sets of wave trains. This is where a group of waves of the same size move at the same speed. Neatly organised in sets, the waves travel for miles and miles uninterrupted across the ocean until they hit our shorelines.

It’s not actually the water that’s moving – it’s the energy within the water that was generated by the winds out to sea and is now travelling towards the shore. So when you’re surfing, you’re actually dancing with pure energy that has travelled thousands of miles across the ocean. How cool is that?!

How to read a surf forecast

Now that you understand how waves are formed, you’ll be able to predict the surf with more accuracy and confidence – and surf forecasts will make a lot more sense! 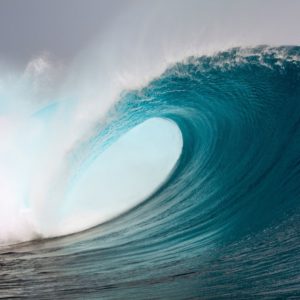 The biggest waves are generated by strong storms out to sea – the further they travel, the bigger they become.

The wave and swell size is the first thing you should look at as this will indicate how much swell is out at sea. It’s measured in feet or metres depending on where you are in the world. What’s the difference between wave and swell height? Well, swell height tells you how big the swell is out at sea. Wave height is how that translates to the size of waves hitting the beach.

If you’re looking at Magicseaweed, you’ll see they give the swell a rating out of 5. This refers to the quality of the waves (so 1 star would theoretically mean really poor conditions, while 5 stars would mean epic waves). But remember that this is just a computer program that uses algorithms to decide these ratings – and a computer doesn’t have any understanding of the dynamics of the beach. For example, giving a 5-star rating to a beach that on a neap tide never gets low enough to surf is not good advice.

They also show the size, period and direction of the primary swell and secondary swell. This is because we often have swells that are generated from different sources or weather events hitting the same shore. The primary swell is the most significant (read: larger) and the secondary is weaker. This is very useful information when you have a good knowledge of a certain beach or surf break. It can give you a good indication of the way the waves will be breaking (wedgy, peeling left or right, closing out etc.).

Once you know what the swell is doing, have a look at the wind direction. This will determine how clean the waves will be.

Offshore winds (wind blowing from the shore out to the ocean) give us lined up, clean or glassy waves (the ideal conditions). The wind effectively delays the wave from breaking, which means the wave will only break at a critical point and will hold a steeper face for longer – a much cleaner canvas to surf on. You can tell when the winds are blowing offshore when you see incredible spray like this!

But with offshore winds, you can have too much of a good thing. Strong offshore winds can delay the breaking so much that the waves don’t break at all, especially for smaller waves. This is also when you’ll be paddling like crazy to get into the wave but the force of the wind will literally blow you and your surfboard back, and the wave passes on beneath you.

If the winds are onshore (wind blowing from the ocean towards the shore), the waves will probably be messy and not so great for surfing. This is because the onshore winds cause the waves to topple over before they become very steep, meaning it will be harder to catch them. It might also cause the waves to break and then reform again instead of maintaining one long wall to connect between sections. Although this makes the surf conditions less than ideal, it also means there will probably be less people out in the water (and fewer people = more waves for you!). Onshore winds can make the waves mushy and messy, but you’re likely to be one of the only ones out in the water. The higher the wave period, the more size and power the waves will have.

The next thing you need to look at is the wave period. This is the length of time that passes between successive waves and is referred to in seconds.

The wave period is actually a better determinate of good surfable waves than the predicted wave size since it tells you how powerful and big the waves will be. Longer periods tend to create stronger and larger waves, while shorter periods generate smaller and less powerful waves.

The further away they come from, the better the waves. Anything below 10 seconds could get choppy with the wrong winds. Ideally, you want a period of 10 seconds with gentle offshore winds for clean waves. The tides also play a big factor in predicting the surf.

Lastly, don’t forget to check the tides before heading out for a surf. Some spots only work on certain tides, for example, if a beach gets totally covered by water at high tide you won’t find any waves there at that time. Some breaks work better on the push (rising tide), others are more fun when the tide is dropping. The only way to find out what tide a surf spot works at is by going there and seeing for yourself how the waves change as the tide moves.

Some useful surf forecast websites to check out include Magicseaweed, Surfline and Windguru (for a closer look at the winds). You can also use specific websites for each aspect of wave forecasting! Go to metoffice.gov for all you’ll ever need to have a comprehensive look at the current and future isobar charts. WINDY.com is great for a wind forecast and tides.org is the go-to for tides.

Building your own picture of the conditions is really the key to understanding waves and predicting them in the future. The best way to learn is by going to your favourite spot and watching the waves in all weather conditions, tides and swell sizes. Then you’ll never miss a good day of surfing ever again!