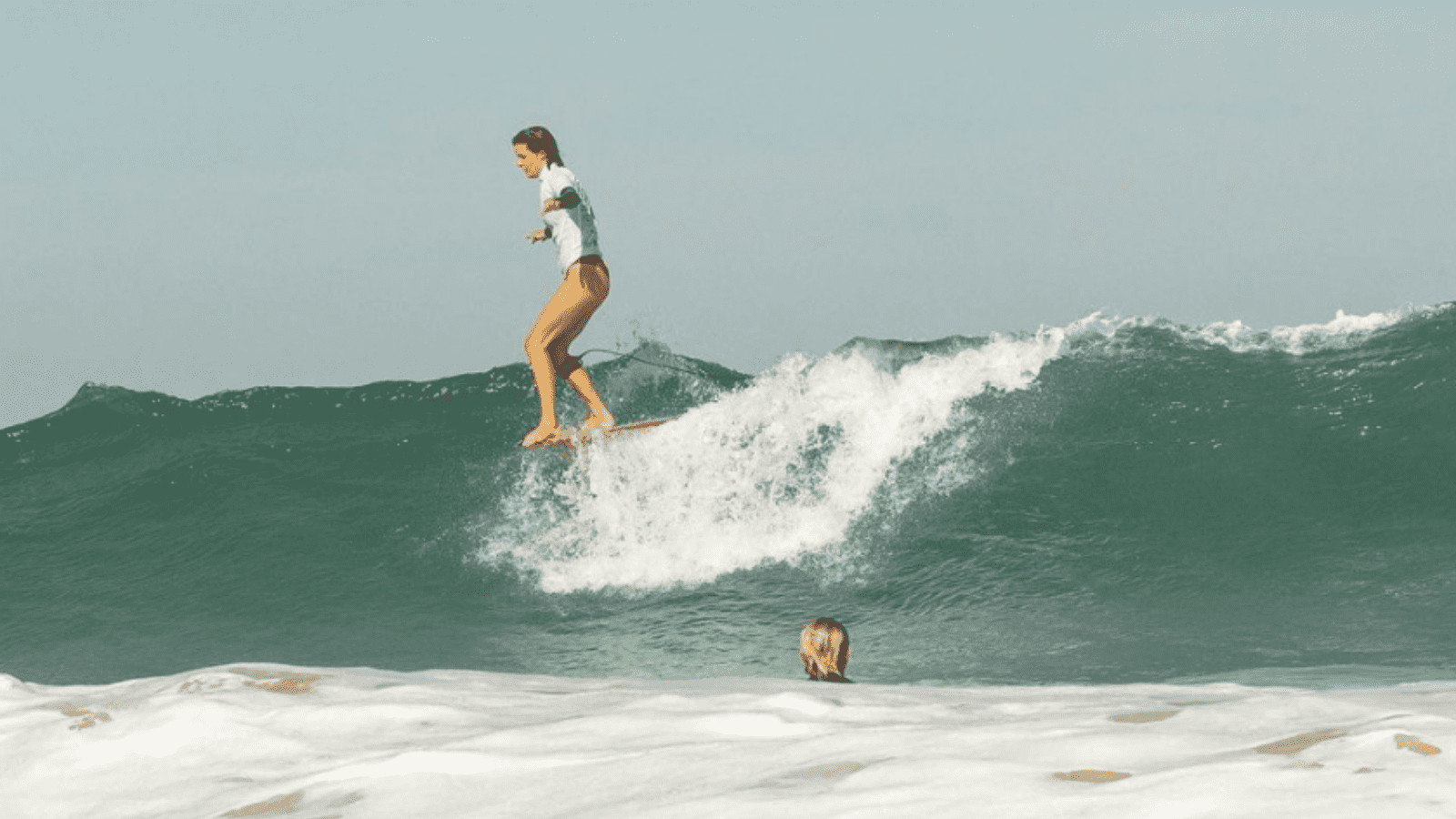 07 May Longboarder Lucy Small Calls Out The Inequality In Surfing

Posted at 13:52h in Uncategorized by Rachel 0 Comments
7 Likes
Share

Women’s surfing made history when the World Surfing League committed to making all prize money equal in 2018 between men and women. The rule came into effect in 2019 and it was a great move, but it was also long overdue! So that is why it was a shock to hear that Australian surfer Lucy Small, the women’s surfing champion of a Sydney longboard surfing competition had to call out the organisers and sponsors of the Curly MalJam Pro on Saturday, April 24th.

Lucy Small won the Curly MalJam event on the Northern Beaches in Sydney and received just $1500 in prize money while her male counterpart shockingly went home with $4000, over double her prize money. During her acceptance speech, Lucy highlighted the disparity in women’s surfing and called out the inequality of walking away with less than half the prize money of the male winner. The Curly MalJam was not a WSL sanctioned event highlighting that there is still a lot of work to be done in order to combat sexism in women’s surfing, especially in the lower ranks.

In Lucy’s speech, she said “Thank you so much to the sponsors for the money that they have put into the event but I would say it is a bitter-sweet victory knowing that our surfing is worth less than half of the men’s prize money. It took the same amount to drive here, the costs to fly here are the same, our accommodation costs the same yet our surfing is worth half as much. So maybe we can think about that for next time.” Lucy’s words were met with appreciative groans from the audience who were also shocked to hear the news.

Lucy took to social media and posted a clip of her acceptance speech on Instagram and Facebook where she captioned the post: “Sometimes you just gotta be prepared to be disliked in order to get what you want.” 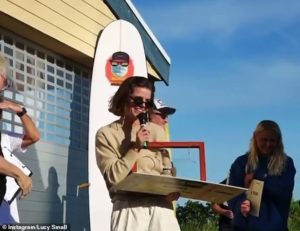 Since posting the speech it has been picked up by national and international news outlets creating waves across the world in the surfing industry.

ABC News in Australia asked Lucy “Had you always planned to call out the organisers and sponsors if you had the opportunity?” and she replied, “definitely not, I went into the event not knowing that there was this big disparity, just before the presentation I made that decision because I was so annoyed and so mad that this had happened, yet again.”

I am sure many women would agree to the same level of disappointment in a sport that had made leaps in the right direction, only to find out that was not the case in the lower ranks of the competition.

When asked about the moment where she discovered that the male winner would receive more than double what her prize cheque was, Lucy said “I came from the final and a couple of people had said, oh I think you might have won that one. Someone mentioned I think the prize money is not the same, and I thought that can’t be right. We have equal prize money now, so I actually went over to where they were setting up the presentation and had a look at the big novelty cheques on the table to see and saw the amount and how different it was. It just made me feel really upset. You have this moment and you put in so much to get to that point and yet again you aren’t recognised in the same way that the men are. So I felt pretty annoyed.”

Does Sexism Still Exist In Surfing?

ABC News went on to ask Lucy the question that might have crossed many minds “Do you believe it is sexism, plain and simple, or are there differences in the men and women’s competition that might account for the difference in prize money?”

Lucy responded “Yes, I think it’s sexism, it’s definitely sexism. I think the idea that there are reasons why the prize money should be unequal, like what reasons could there possibly be? Who’s measuring the standard? In the end, we are putting in the same effort, we are all there competing in the same conditions, on the same day. The only difference is gender really. I would really disagree with any of those arguments about market forces or the size of men and women’s markets in the surf industry. That is kind of an outdated mindset and we need to be recognising the contribution and the legitimate part of surfing that women have.”

Asked about if there was sexism in other parts of surfing, Lucy replied, “It’s changing and it’s improving, I think ongoingly there are definitely barriers to women being fully included, and fully part of, and having ownership of the surf industry. A huge part of the gender imbalance is to do with sponsorship I think. I have definitely spoken to some of the very elite-level athletes who still find differences in the way that the trips they are taken on. Teenage boys and guys are taken on these intense surf trips and often the women who are sponsored by these same brands are then taken to do lifestyle shoots and there’s not so much emphasis on their surfing. That aspect still needs some work. It is a gradual change, we need to collectively work on how to rectify this. It’s slow to change.”

Former surfing champion Layne Beachley was asked by ABC News on the push for equal prize previously and it does seem as though the sport has some way to go. 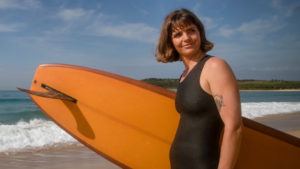 Time For Change In Women’s Surfing

The Curly MalJam Instagram page has yet to comment on the topic and it was even reported that they initially uploaded Lucy Small’s speech but have since taken it down.

Tim Reilly, the president of the Curl Curl Longboarders Club defended the situation telling the Sydney Morning Herald “the prize money was made unequal because it has been that way since the club was founded in 2011”.

With the club secretary, Phil Nicol stating that they had “done nothing illegal” and “it was a moral issue”. Tim Reilly told the publication that Lucy “should have come and seen me, it was an easy thing that could have been fixed”. Whilst at the same time saying “I just feel bad for the guys who ran it for the whole day and put hundreds of hours into it”. Hearing the male leaders of the surf club be so defensive on the topic and even suggesting that it could have been dealt with quietly just goes to show that work still needs to be done. The good news is that Phil Nicol told the news publication that the club would make changes to ensure the prize money was equal in all categories in the future. 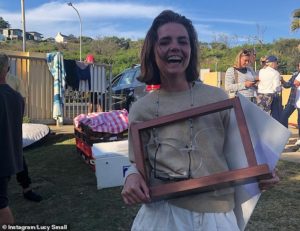 Lucy created quite the stir and received an overwhelming response to her speech that she posted on her social media calling out the inequality and thanked her fans on her Instagram delivering some positive news on the outcome.

“Hey, Everyone. Thank you so much for all the wonderful messages of support over the last few days. I honestly had no idea anything like this would happen but it’s been the most heartwarming thing to hear from people all over the world and to realise that we’re pretty ready for change, one small part at a time if we’re willing to be brave. A donor has put up the money to back pay for the missing prize money from last weekend and Surfing Australia has written into their rule book that all affiliated events must have equal prize money. It’s a small victory in an industry that needs widespread change and more broadly we need cultural shifts in the way we view women in sport and the legitimate place we have in sporting spaces.

Thanks again for all the support, I am looking forward to the future of women’s surfing and the way I am sure it is going to grow.

In 2021 it is quite sad that we still have women lobbying for equal pay in sports. Lucy Small has continued to keep the fire alive by lighting a spark on a conversation that we have been having for many years. We must continue the conversation by highlighting the adversity that women face in sports and praise those who do have the courage to speak out. 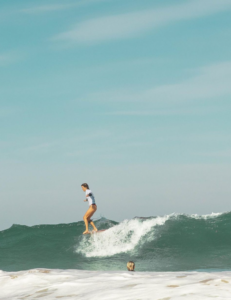